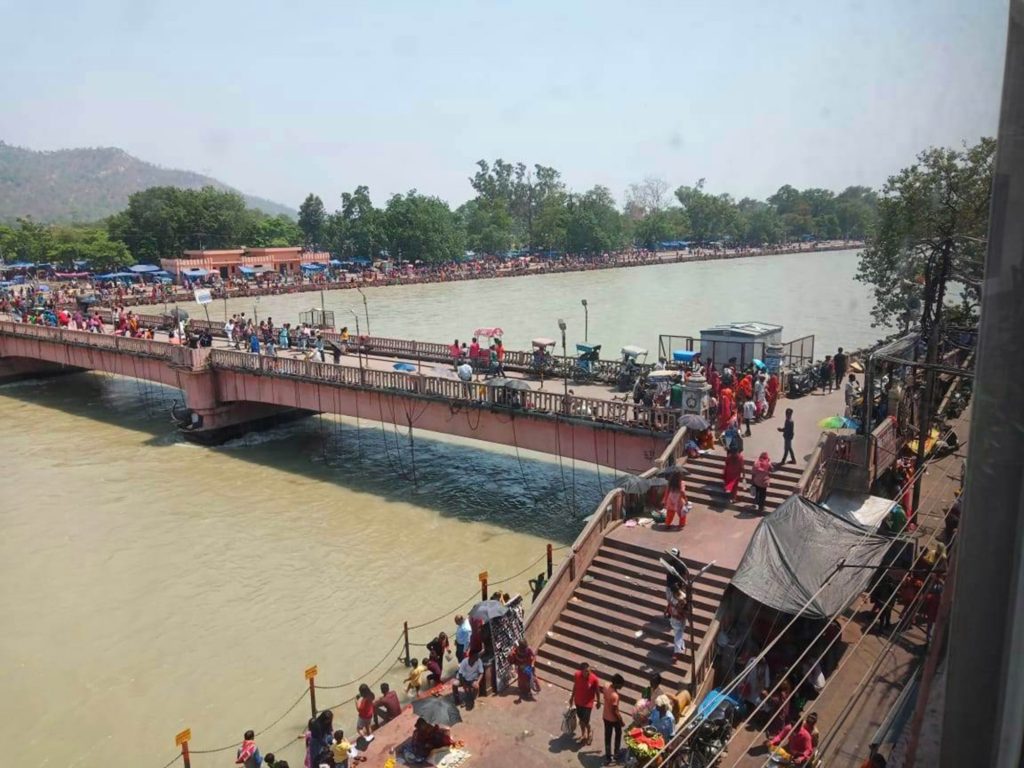 HARIDWAR ⁠— Gateway to Dev Bhoomi of India, is in the Himalayan state of Uttarakhand. Famously known for the unnumbered pilgrim destinations in the state; Haridwar is considered to be the terminus a quo of all such pilgrimages including the noted ‘Chardham Yatra’ spanning the four key holy sites at Gangotri, Yamunotri, Kedarnath and Badrinath. This city of yore is perfectly situated at the point where River Ganga exits the Shivalik range and enters the Indo-Gangetic plains; making it the most desired stop for all devotees to take a dip in the sacred waters and offer their prayers, before proceeding further in their journeys, to various temples perched in different parts of the mountainous terrain, spread throughout Uttarakhand.

I came here with my family and we got off our taxi on the main road, to be greeted by a hired man from our hotel, who instructed us to get into his ‘cycle rickshaw’. He swiftly arranged our luggage behind us and started pedalling with ease. He surely seemed rugged enough to push his ‘cart’ forward with the added weight of his passengers and their belongings, despite the fact that his physical appearance spoke otherwise. While we slowly glided across a river-bridge to reach the other side, I noticed that, since the vehicular movement was firmly banned on this bridge, scores of people moved about to and fro, either on foot or by pulled-rickshaws, chattering and giggling away noisily. Although, this carefree scene initially gave me a haywire impression about the city, it was dispelled in a twinkling moment, by the sheer thrill of seeing the fast-flowing Ganges, glistening beautifully under the yellow rays of the mid-morning sun, beneath, on both sides of the bridge. The river flowed wide and majestic right through the city; with hotels, havelis, residences and shops on one side of the bank, and the Highway on the other side. Within a quarter of an hour, we were dropped at the steps to our hotel, very aptly named – Ganga Lahiri, present bang on the river bank, soon after crossing.

Ganga Lahiri, which seemed to have an ordinary frontage, pleasantly surprised us with its aesthetically yet traditionally done interiors. It had lovely checks designed flooring and, ornate wooden carvings of doors and panels. We were charmed by a sweet incense scent that filled the hotel; and also by the manner of welcome, by its extraordinarily courteous staff. The rooms that lined the long corridors were spacious and royally furnished; the icing on the cake about this stay was the uninterrupted view of the Ganga, as soon as one steps out of their room onto the corridor, due to the large glass panes fitted along the entire length of the floor, so as to provide the inmates with the luxury of witnessing all the activities going on the riverside from just outside their rooms. 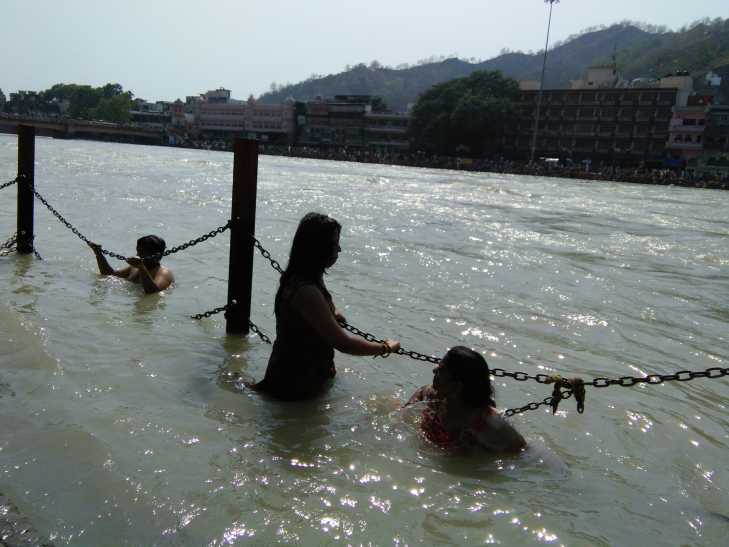 Post some quick refreshments, we ventured outside to absorb the high-spirited vibes of this religious place and also to soak ourselves in the same vibrant mood. The vast stretch of the banks, on both sides of the Ganga was used as ‘bathing ghats’, and hence innumerable people thronged these areas to experience the unmissable fortune of immersing themselves in the holiest of all rivers. When we managed to find a small clearing amidst the swarm, it didn’t take us much time to get down the few stairs, at first only to wet our feet. Inspite of the blazing hot summer afternoon sun, the water was amazingly chill as it bounced around our legs. So clean was the water, that there was no moss or filth lurking or stagnating anywhere at all, though we were informed, that the bathing ritual takes place unrestrictedly to any number of people who drop a visit, throughout the year. I was much impressed by the cleanliness that I couldn’t resist going down further to stand in the cold water neck deep! The river gushing in full volume, made gentle waves as it ran past me, sending an electrifying sensation inside me. It was at that moment that I realized that there is really something about the Ganges…, something so inexplicable…, something only to be felt in order to understand its metaphysical nature, which is why it magnetically draws zillions of people and evokes a fresh sense of spirituality in them, by magically entwining into their mind, body and soul; so much that people like to believe that even a drop, or a splash of this consecrated water on you is capable of ‘washing out your sins’. I held my breath and plunged my head completely into the buoyant river once before getting out, feeling totally regenerated.

Later in the evening, we were supposed to participate in the Ganga Aarti – a distinctive form of prayer dedicated to Goddess Ganga, which takes place every day unfailingly. So, we headed back to our hotel, for a change into dry clothes, and then to relish a specially prepared ‘hi-tea’, before getting ready for the prayer service. 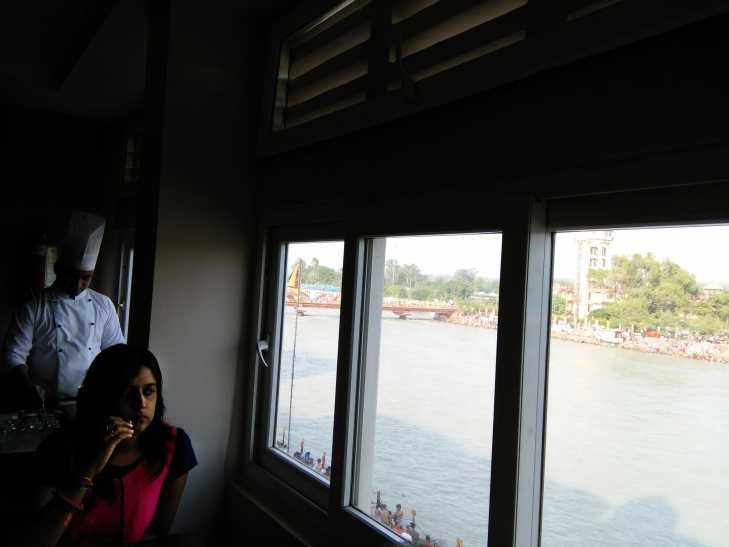 A unique feature of this hotel was that every room had its own tea-table set in front of it, adjoining the glass-panes. These window panels not only let in maximum light onto the passageway but also gave a splendid view of the massive river. We sat relaxed, sipping into hot, brewing tea which was served on our tea-table; and enjoyed the gleefully chaotic panorama of the ‘ghat’, even as we were biting onto some delightful cookies that were laid before us.

Haridwar was far from the push-n-pull of urban cities, hassles or time-constraints……

Thereafter, a priest, personally appointed by the hotel, volunteered to escort us to the ‘Brahma Kund’ at Har-Ki-Pauri ghat – the most auspicious landmark, owing to its mythological significance.

HAR-KI-PAURI literally translates as ‘the Lord’s footsteps’. Classical mythos passed down since thousands of generations ago, strongly iterate that Lord Shiva and Lord Vishnu, visited the Brahma Kund present here, during the Vedic period. It is also revered as the precise spot where drops of a divine nectar of immortality known as ‘Amrit’ fell down from the heavens.

This area of the ‘ghat’ is located on the west bank of the river canal, which is characteristically dotted with many ancient temples and ashrams. 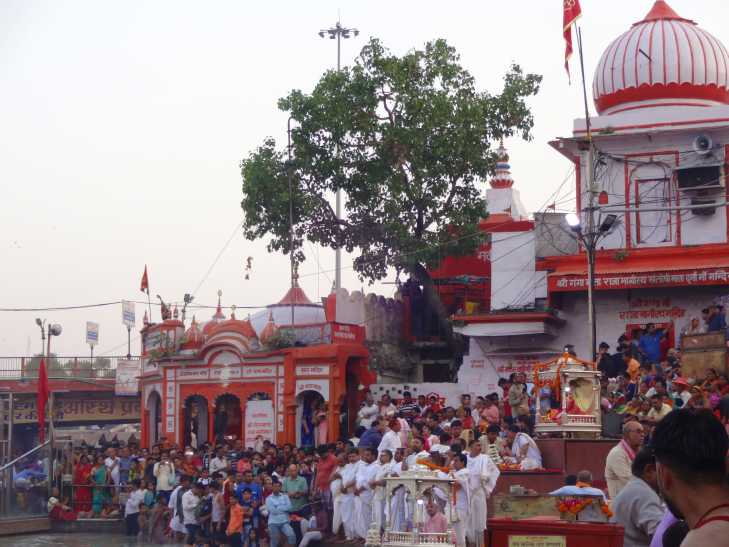 By the time we reached the sacred venue, by walk, countless numbers of both young and old, men and women had gathered on the steps surrounding the ‘Kund’, and waited with overwhelming devotion for the ‘aarti’ to begin. The crowds that swelled all the more, with every passing second, only showed beyond doubt as to how humankind had an unflinching belief in the godly mystique and eagerly sought to be a part of the ritualistic event, about to unfold… 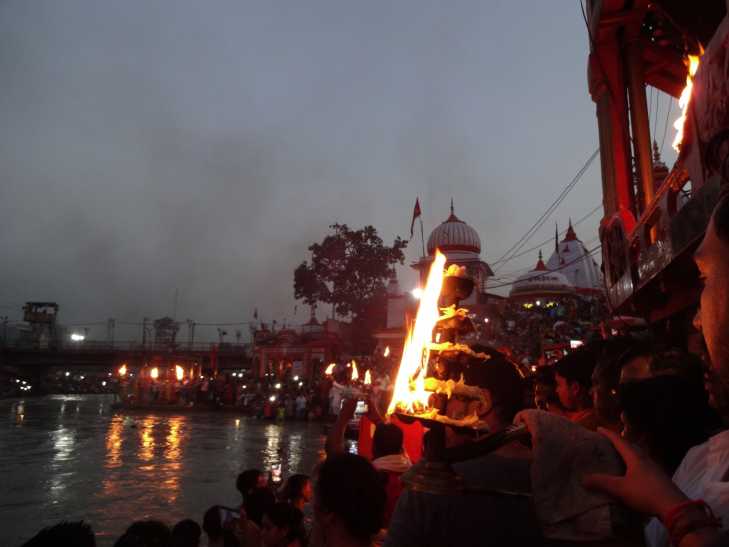 At sundown, with the hue of twilight transforming the bright azure sky into an alluring peachy dusk; it all commenced when a band of priests dressed in white cloths, came forward, held their mikes, and sang aloud, many hymns in praise of the supreme Ganges – the water body which is the soul of our country, and provides a lifeline for crores of Indians.

Following their chants, the priests instructed all people in attendance at the ‘ghat’ to raise their hands up in the air, and sincerely pledge, not to pollute the River Goddess who seamlessly blesses her ‘devout children’ bountifully.

Next, the priests moved to different corners of the ‘Kund’, and lit ‘diyas’ – large bowls of fire, filled with oil and camphor soaked wicks. They ceremoniously rotated their hands in clockwise circles whilst holding the ‘diyas’ in their hands. The beautiful golden reflections of diyas in the water along with the resounding gongs of temple bells, transcended the environment into a blissful scape, marked beyond vocabularic description.

Shortly, all those who wanted, including me, started floating down small earthen diyas, placed in a bed of marigold and rose flower petals, held in baskets made of leaves stitched together. This practice was symbolic of a thanksgiving in gratitude, and at the same time, of sending our wishes to the Almighty through the river. Some also spoke of liberating the souls of the departed from the cycle of death and rebirth, termed as ‘moksha’ whereas others hoped to get absolved for all their misdeeds, by the mercy of the Goddess.

It had grown dark when the congregation began dispersing; after watching the grandiose spectacle of numerous diyas with flickering flames, drifting along with the speedy yet steady currents, thus bringing the whole river alive with their illuminations. One cannot help but feel bewitched at this dazzling sight! 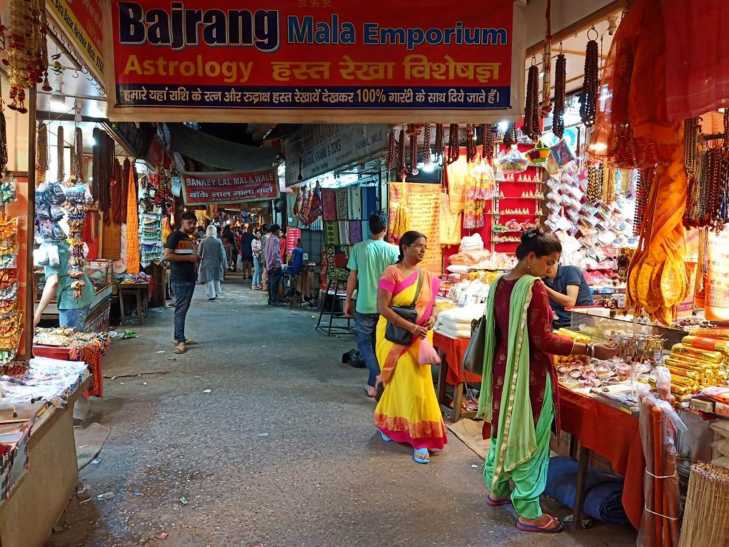 On the way back to our hotel, we strolled through a few of the old, meandering by-lanes of the city, behind the ghats. The narrow lanes and alleys, called as ‘gullies’, had famously become the lively, colourful and bustling market area in Hardiwar. There were continuous rows of shops, with a varied range of items on display, like, handicrafts, clothes, glass bangles, metallic utensils, local sweets-n-snacks, and herbal medicines. There were also many selling religious paraphernalia, like carved stone-idols and rudraksha seeds. Small empty bottles were also sold, for those who were interested to fill their own ‘Ganga jal’ or sanctified water directly from the river, to carry back to their homes; so did I.

Later, in the hotel, an opulent dinner buffet invited us straight into an in-house restaurant, the Annapurna, which was no exception to the rule that, Haridwar is absolutely committed to vegetarianism. As a vegetarian, I felt instantly pampered when I saw too many mouth-watering dishes arrayed on the counter. It was more than we could ask for, after a hectic day’s schedule. As per routine, a talented flute musician, seated outside in the hallway outside the dining, helped us enjoy our feast, by soothing our senses with his symphonic tunes.

A sumptuous and satisfying meal was the perfect way to end this incredible day. I stood near the glass window, on the corridor to perceive the night view; in contrast to the daytime view, it was much calmer and quieter, with just the rhythmic flow of the Ganges. I felt extremely happy as I cast my mind back to the glorious evening… I was lost in a trance… with the hymns of Haridwar still ringing in my ears……