Tourism Bharat: Read about TOURISM IN Jammu and Kashmir, know Its Popular Destinations, points of interest, best time to visit J&K And More! 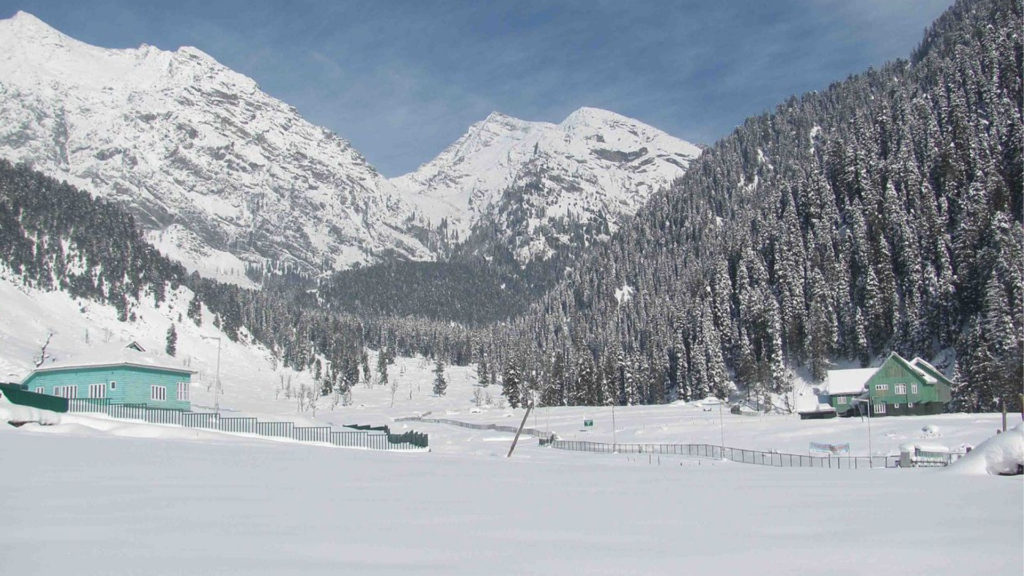 Jammu and Kashmir is rightly called the paradise on earth. This region offers pleasant weather, lofty snow-capped mountains, scenic green views, beautiful gardens and pristine lakes. For travellers seeking refuge from the daily chaotic life of cities, Kashmir is a dreamland that soothes human senses with its breathtaking natural beauty and tranquility.

J&K is an all-weather destination and is one of India’s largest tourist hubs. The northernmost state of India is primarily divided into three regions: Jammu, Kashmir, and Ladakh. All three regions have their own beauty and distinct characteristics. The mouth-watering cuisine, fantastic hospitality hotels and resorts, numerous adventure options, and picturesque settings make holidays in Jammu & Kashmir the most remarkable sojourn.

With its incomparable conjectures and flourishing on both the sides of River Jhelum, Srinagar is famous for its lakes and the charming rows of houseboats floating on them. Thus, it is aptly known as “The Land of Lakes”. These sublime lakes offer the best setting for sports such as Canoeing and Kayaking. These water bodies also serve as major fishing destinations of the city. The lakes are occupied with traditional Kashmiri boats called as “Shikaras”, giving rides to people from the banks to the house boats in the lake.

The city swanks of being the summer capital of the state of Jammu & Kashmir. Besides this, Srinagar is undoubtedly the best place to explore the arts and crafts of the state. The conventionally rich markets of the city are popular for a number of handicrafts and dry fruits. Srinagar enjoys an alpine weather and receives heavy snowfall during the months of December-February. The best time to visit Srinagar is during summers between April and June.

Situated on the slopes of the Shivalik Range, Jammu is the second largest city in the state of Jammu and Kashmir. It is the renowned winter capital of the state. Jammu is not only about the scenic exquisiteness, rather it depicts lakhs of tourists every season, who come to pay homage and experience tranquility in ancient temples, Hindu shrines, castles and forts.

Jammu is popularly known as “The city of Temples” for having an exceptional number of temples. Hindu holy shrines of Amarnath and Vaishno Devi are the most famous attractions in Jammu. The surprise element is the exclusive blend of Islamic and Hindu architecture styles evident throughout many historical buildings in the city. Peer Kho Cave, Panchbakhtar temple, Ranbireshwar temple, Dargah of Ali Shah, Shivkhori are among several other holy places and attractions found in this city.

Gulmarg is a hill station situated in the Baramulla district of J&K that offers unexpected magnificence and natural beauty to tourists. The place is situated in a pine surrounded basin of the Pir Panjal Range. Gulmarg was revealed as a hill resort by the britishers and was formerly called “Gaurimarg” by the local people, but Sultan Yusuf Shah changed its name to “Gulmarg”. The sultan was extremely mesmerized by the beauty of the grassy slopes and flower meadows of Gulmarg. This destination served as a popular resort during the Mughal rule. Even the great emperor Jahangir once collected 21 special varieties of flowers from this valley.

Gulmarg also boasts of having the highest green golf course in the world. This golf club was started by the British for golf lovers. However, currently, it’s been managed by the J&K Tourism Development Corporation. Adventure fanatics can try sports such as skiing and paragliding at Gulmarg especially during winters. This place is a winter paradise for ice lovers. The best time to visit Gulmarg is during winters during November to February.

Popularly known as the “Gateway to Ladakh”, Sonmarg is a renowned hill station known for adventure sports. This place is also known as trekker’s heaven. The most popular trekking route that runs through Sonamarg directs to the holy Amarnath cave. The city remains cold even during summers and is surrounded by snowy mountains, dense forests full of sycamore and alpine flowers, silver birch, and fir and pine, present a fascinating sight for visitors.

Nilagrad River from Sonmarg is a major attraction known for its reddish water. Local people believe that the water has healing power for many diseases. And, hence every sunday people visit to take bath in this river. Bird watchers and ornithologists can visit the Manasbal Lake which serves as an abode to several aquatic birds. Best time to visit Sonmarg is during the months of May-June.

Also known as “The Valley of Shepherds”, Pahalgam is considered as a jewel in the Kashmir Valley as it gets the benefit of the astonishing Lidder River running right through the town. Pahalgam was ruled by the Mughals in the medieval period. Later, when the region came under the Hindu rulers, it was merged with Kashmir. It remained an independent state during the British period, and became a part of India after independence in 1947. The town, being situated at the convergence of the Aru and Sheshnag Rivers, tenders outstanding views of the magnificent snowcapped mountains.

Pahalgam is Kashmir’s leading resort that remains cool even during the summer season. It is one of the major saffron growing regions of Asia. Besides this, Pahalgam and its nearby areas are well-known for Trout Fishing. You can enjoy many adventurous activities here, but one needs to get prior fishing licence approval. Moreover, the tourists are permitted to catch only six fish in a day.

Situated in Jammu and Kashmir, Amarnath is one of the most important pilgrimage centers in India for the worshippers of Lord Shiva. The Amarnath Cave is home to an enshrined image of ice called the Shivaling formed naturally. The Amarnath cascades into the categories of the most famous Hindu Shrines in the world.

The destination is visited by millions of visitor every year from all across the world, which is notably known as the “Amarnath Yatra”. Lakhs and thousands of devotees make a pilgrimage to the cave during summers, while it is open, as they cross challenging mountain terrains to reach the ice stalagmite formed inside the cave. It is also believed in the Hindu mythology that this place is considered to be the place where Lord Shiva discovered the secret of life and eternity to Goddess Parvati. The Amarnath Yatra takes place in July and August, making it an ideal time for visitors to see this place.

Leh – the capital of Ladakh region of J&K, is the most adventurous and the largest city of Ladakh. It is an excellent base for long day trips out into the Indus Valley. Leh is also known as the “Snow desert”. The region is fostered by the Zanskar River which flows further into the Indus River. Leh has been the center of Tibeto-Buddhist Culture for ages and was declared as the regional capital as well.

Besides the lovely landscapes and alluring natural beauty, its colorful monasteries attracts the devoted Buddhists from across the world. Islam and Tibetan Buddhism are the two major religions practiced in Leh. It is a paradise for adventure enthusiasts. High peaks, snow deserts, vast landscapes, and rivers form the perfect location for various adventure activities such as Polo, Mountain Biking, Safari and Trek, Wildlife Treks, River Rafting, and Trekking. Leh also has an airport, which has regular flight links to India’s major cities such as Delhi, Mumbai, Chandigarh, Jammu and Srinagar.

Points of Interest In Jammu & Kashmir

Some of the mind-blowing trekking routes in Jammu and Kashmir are Amarnath Yatra, Gulmarg Trekking, Sonamarg Trekking, Thajiwas Trekking, Trek From Sonamarg to the Valley via Gangabal Lake, Nichnai to Vishansar lake, Vishansar to Gadsar via Kishansar lake and Gadsar Pass, Gadsar to Satsar, Satsar to Gangabal twin lakes, Gangabal to Naranag, and Kishtwar and Bhadarwar.

Jammu & Kashmir is a truly all-weather travel destination. Different seasons mean a unique opportunity to see the beauty of this land from a new perspective. While Ladakh and Kashmir Valley get good amount of snowfall during winter, Jammu region offers moderate climate most of the year.

If you love snow and want to experience the once in a lifetime feel of playing in the ice then visit Kashmir Valley during the months of November to March. During this period, you will see Kashmir Valley coated with a thick blanket of crystal clear snow. During the same period, some areas of Ladakh are closed to visitors and adventurers due to ice related road hazards. Winter season is a good time to visit Jammu too. The temperature ranges from 5-27 degree celsius during the months of November to March, making Jammu an ideal destination to visit.

In summers, the Jammu region remain considerably hot as temperatures soar to 48 degrees celsius. However, the Kashmir Valley and Ladakh regions offer a distinct experience to witness the exquisiteness and greenery of Kashmir. It is during summers that Amarnath Yatra takes place and thousands of pilgrims throng Kashmir Valley to visit the holy site. Summer season (April to May) is the peak tourist season in Ladakh region, it is during this period that the place becomes alive with adventure and tourist activities

Things to do in Jammu & Kashmir

When it comes to adventure sports, you will be spoilt for choice in J&K. Some of the adventure sports you can enjoy in Jammu and Kashmir are Trekking, Skiing, Aero-Sports, Camping, Snowboarding, Horse Riding, Golf, River Rafting, Mountain Climbing, Mountain Biking, Canoeing, Hot Air Ballooning, Fishing, Gondola Ride, Horse Riding, Camel Safaris, and Paragliding. The best places to enjoy these sports include Gulmarg, Sonmarg, Kargil, Srinagar, Pahalgam, Jammu and Ladakh.

2. Enjoy the Culinary Delights of Kashmir

Kashmir is a heaven for a true food connoisseur. Its rich food and exceptional hospitality will win your hearts and gratitude. The signature culinary delight of J&K is Wazwan — a multi-course non-veg meal. It is considered as a unique and inseparable component of Kashmiri culture and cuisine. When it comes to pickles, you can find every kind of pickle from vegetable to fruit and fish to mutton. The majority of J&K population is non-vegetarian and it means that you can get kebabs and tikkas of all varieties, shapes, and tastes in almost every corner of the state. You can try these non-veg delicacies with Kashmiri bread locally called as ‘Lawas’.

For tea lovers, Kashmiri chai (tea) is a must. The Kahwa and Noon Chai are something that you won’t find anywhere else in the country; so whenever you visit Kashmir, make sure that you drink these aromatic teas.

Shikara rides are one of the most fascinating facets of Jammu and Kashmir. A relaxing ride while enjoying the surrounding mesmerising views around Dal Lake or Nagin Lake is truly an experience worth cherishing throughout your life.

Kashmir’s famous floating market in Dal Lake, Srinagar is a feast for the eyes of travellers. It is among the world’s handful of floating villages surviving today. It is said that this market is over 100 years old and all the vegetables and fruits sold here are cultivated in the floating gardens of the lake itself. You can explore this one of its kind floating market during the summer season as it remains closed during winter. The sight of local boatmen selling fresh and beautiful roses, daisies, and water lilies will surely make you fall in love with this place.