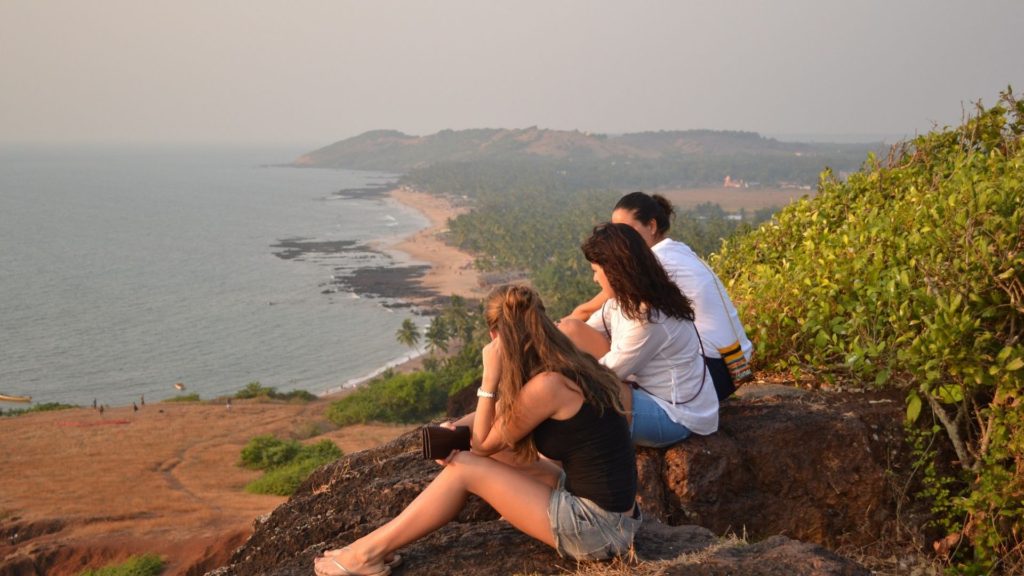 Goa — Sun, Sea and Sand! These three words perfectly sum up what Goa offers to travelholics, adventurers and holidayers.

One of India’s smallest states, Goa is strategically situated in the Sahyadri Range in the Western Ghats. The vertical strip of the state begins from Tiracol in the north to Palolem in the south, and is surrounded by the majestic Arabian Sea on the west, Maharashtra to the north, and Karnataka to the east and south.

Goa is India’s most popular beach destination with superb beaches that are thronged by millions of travellers each year. The culture of Goa is a blend of Indian and Iberian (Spanish & Portuguese). It is rich in folk culture with a delightful blend of dynamic Konkani folk songs and miscellany of Portuguese dance and music.

Panaji, Margao, Vasco, Mapusa and Ponda are the main cities of Goa. Its beachnik lifestyle is best experienced during the winter months i.e. during October to February. However, being an all-weather holiday destination, the state attracts tourists all-round the year.

One of India’s most hassle-free state capitals, Panaji (Panjim) crowds around the peninsula overlooking the broad Mandovi River, where cruise boats and floating casinos pursue the waters, and advertising signs cast neon reflections in the night.

A magnificent overwhelmed church lords over the vivacious city center, a broad leafy concourse skirts around the river, and the grand colonial-era buildings rub shoulders with arty boutiques, old-school bookshops, state-of-the-art malls, and backstreet bars. But it’s the twist of narrow streets in the old Latin Quarter of Fontain that really steals the show. Portuguese influence is more candidly experienced here than anywhere else in the country. A day or two in Panaji really is an essential part of your ultimate Goan experience.

Mapusa, also known as ‘Mapsa’, is the largest town in northern Goa, and is most often visited for its busy Friday market. Every Friday, the Mapusa market bulges at the seams, with apparently every square inch of space occupied by sellers with only just enough room for the prospective buyers, the alleys between the regular stalls being occupied with temporary mats and boards.

Ancient Goan agrarian community had a well-established Gaunkari or Community Farming System, where villages formed associations, worked on community land and shared profits. Market day was a major event, with goods brought in from every district to one central area. Mapusa has thus remained a prominent market center for many centuries. Many travelers pass through Mapusa nevertheless as it’s a major transport hub for northern Goa buses. Most facilities are arranged around the Municipal Gardens, just north of the Kadamba bus station and the main market site.

Bicholim, also known as Dicholi, is a city and a municipal council in North Goa district in the state of Goa, India. It is a town in the territory of Goa. It is in the mining heartland of Goa. The major part was of an independent Warlord (Prabhu Desai of Sankhali/Sanquelim). It was taken over by Portuguese in late 18th century as part of New Conquest.

Mining constitutes a major chunk in the economy of Bicholim. Wednesday is the market day where people in and around Bicholim gather in the main market region for trading small goods/commodities. The church of Our Lady of Grace dominates the city square. A historic monument Nimuz Ghar (possibly Namaz Ghar) stands on the hilltop prominently overlooking the town of Bicholim. The monument was built to commemorate the victory of the combined Muslim and Hindu forces over the Portuguese. The peaceful Mayem Lake is a major tourism destination in Bicholim.

Vasco da Gama often shortened to Vasco, is the largest city in the state of Goa on the west coast of India. This city in the former Portuguese territory of Goa is named after the famous Portuguese explorer and navigator, Vasco da Gama (who also held title of Governor of Portuguese India). It lies on the western tip of the Mormugao peninsula, at the mouth of the Zuari River and also serves as the headquarters of the Mormugao sub-district. Mormugao port remains a busy shipping route in Asia. Even today, it is one of the major ports of India and around one-third of India’s ore exports take place here.

Hollant (Issorcim) and Baina are two smaller beaches around Vasco. Apart from the nearby beaches, the city of Vasco is bereft of any major tourist attractions, the salient monument being the 400-year-old Igreja de Santo André (St. Andrew’s Church), located at the entrance of the city. However, the Naval Aviation Museum, near the airport is a popular tourist spot and is one of three such museums in India. Vasco is known for the annual Shri Damodar Bhajani Saptah fair held in Shravan month of Hindu lunar calendar preceding the festival of Nag Panchami. Like all towns and cities of Goa, Vasco celebrates the Shigmo/Xigmo Carnival annually with a street parade where floats from all over Goa participate.

Margao traditionally known as Mathagra, is the second largest city by population, and the commercial and cultural capital of the Indian state of Goa. The town has many sights and destinations. These include a large number of churches and temples in Margao, since the population is predominantly Hindu with a significant Roman Catholics present in the area.

Madgaon railway station is Goa’s biggest and busiest. Being a railway junction, it is positioned at the intersection of the Konkan Railway and the South Western Railway. All trains stop at Margao. Hence, it is used more commonly as a transit stop rather than a tourist destination by many people. Margao is connected by road to other cities like Mangalore, Udupi, Bhatkal, Kumta, Karwar, Ratnagiri, and Mumbai through the National Highway 66 (NH66). Also, there is a road, which connects Margao to Ponda and other towns of the state.

Ponda is a municipal council in the Southern Goa region. It is also known as ‘Antruz Mahal’ because of the presence of abundant famous temples and rich cultural heritage. Ponda lies along the National Highway 4A, which connects Panaji to Belgaum in the neighboring state of Karnataka. The industrial center of the state, Ponda is abode to many large factories and industrial estates, and is Goa’s fastest-growing city. Ponda is the gateway to Goa’s wildlife sanctuaries, both the Bondla and the Mahavir Wildlife Sanctuaries are present here, and also to the well-known Dudhsagar Waterfalls. The nearby Butterfly Conservatory of Goa attracts nature enthusiasts. It is at Pisgal, Priol, and very close to the Tropical Spice Plantation.

Ponda is connected by road to the capital of Goa Panaji, to the main railway junction of Margao and to the International Airport at Dabolim. Buses to nearby villages and towns, as well as interstate buses, also depart from the same bus stand. There are buses regularly between Ponda and Dharwad, Hubli, and Belgaum run by the Kadamba Transport Corporation and Karnataka State Road Transport Corporation. The national highway 17B connects Ponda to Vasco via Verna. The national highway 4A connects to Belgaum/Hubli and Panaji.

Quepem town is the administrative capital for the Quepem taluka. The town was established by a Portuguese noble man Deão Jose Paulo. Curchorem and Sanvordem are the major towns located near the Quepem town. The place is known for the annual Ganeshotsav Festival, Carnival, Shigmostav celebrated with solemnity and cheerfulness. The center of such celebrations is the Municipal Garden, which is at the center of the town. The village banquet of Holy Cross is also celebrated with great zeal in May and October.

The main tourist attractions in the area are the Holy Cross Church, the Old Dam (Band), the Holy Cross Hillock (valé-tembi), and the Palácio Do Deão. Quepem is also known for its picturesque beauty during the monsoon season.

Dharbandora is a sub-divion of Goa which came into existence as a part of Five Panchayats — Dharbandora, Kirlapal-Dabhal, Collem, Mollem, and Sancorda. Konkani is the Local Language here. There is no railway station near to Dharbandora in less than 10 km. However, Madgaon railway station is the major railway station 26 km away from Dharbandora. This area of Goa is a perfect destination for offbeat travel enthusiasts. Dharbandora offers you Elephant Safari, Surface Rappelling, Rock climbing, Zip lining, and enjoying a shower with giant elephants.

Points of Interest In Goa

The best time to visit Goa is from mid-November till mid-February. However, the weather is decent throughout the year which contributes to the enormous amount of visitors it attracts. The time period between November and February is considered to be the best time to visit Goa because the weather is generally cool and pleasant than the rest of the year. The pleasant weather allows the vacationers to relax on the beaches and enjoy the vibrant nightlife of the party capital of India.

Similar to its neighbouring state of Maharashtra, Goa too gets good amount of rainfall during monsoon season (June-Sep). During this period, it is normally recommended to avoid going there for family vacations. However, if you are looking for adventure and thrill, then you can try visiting Goa during the monsoon season too.

Things to do in Goa

Goa was ruled by the Portuguese for a long period of time, however, prior to that it was ruled by many Hindu and Muslim dynasties. All these people have left a mark on Goan cuisine. Every year swarms of gastronomes visit this place to savor Goan delicacies. Goan cuisine is a perfect amalgamation of East and West. Some must try specialties of Goa are pork vindaloo, prawn balchao, pork feijoada, fish Recheado, fish Caldeirada, fish Caldeen, prawn Balchao, pork Assad, caldo verde, bebinca, sorpotel, payasu, patoli, madgane and kheer.

Not many of us know about this wonderful experience of Goa. There are actually two tropical spice plantations in Ponda. Here, you can learn a lot about different spices during the tour and have authentic Goan lunch too. For more details you can contact their website: http://www.tropicalspiceplantation.com/index.php. You will feel close to nature here than anywhere else in Goa!

BONUS ADVICE FOR YOUR GOA TRIP

Before you set off for your Goa tour, don’t forget to carry the following essentials to double the joy of your Goa Trip.